The idea that higher revenues can be raised by lowering tax rates seems counter intuitive to many. In fact, politicians who campaign on lowering taxes are often derided as liars, especially in light of budget deficits. It is often asked: how can anyone promise to cut taxes when the government is already short on revenue?

The fact is that once taxation reaches a certain point it actually deters market activity and encourages tax evasion. In those cases, lowering taxes actually increases the total amount of revenue being collected. This can be proven when we look at the relationship between tax rates and revenue. In economics, the examination of this relationship is known as a Laffer Curve. The Laffer Curve is named for economist Arthur Laffer, though Laffer himself observes the relationship was noted by 14th century Muslim philosopher Ibn Khaldun.

When examining the Laffer Curve, we see that at low rates of taxation the amount of revenue increases proportionately, as is expected. But if we consider a 100% tax rate, one in which the government took everything workers and businesses earned, the result would be near zero in revenues. Without any incentive to work, absent forced slavery, no one would work, at least not on the books. Black market activity would certainly thrive, but in the end government would be collecting next to nothing in revenues. So, if we have zero revenues at a 100% rate, we can prove that somewhere in between 1% and 100% the line of the graph curves. That curve is the point where market activity is being deterred by excessive taxation. If taxes are lowered to below the curve, revenue will increase as market activity increases. 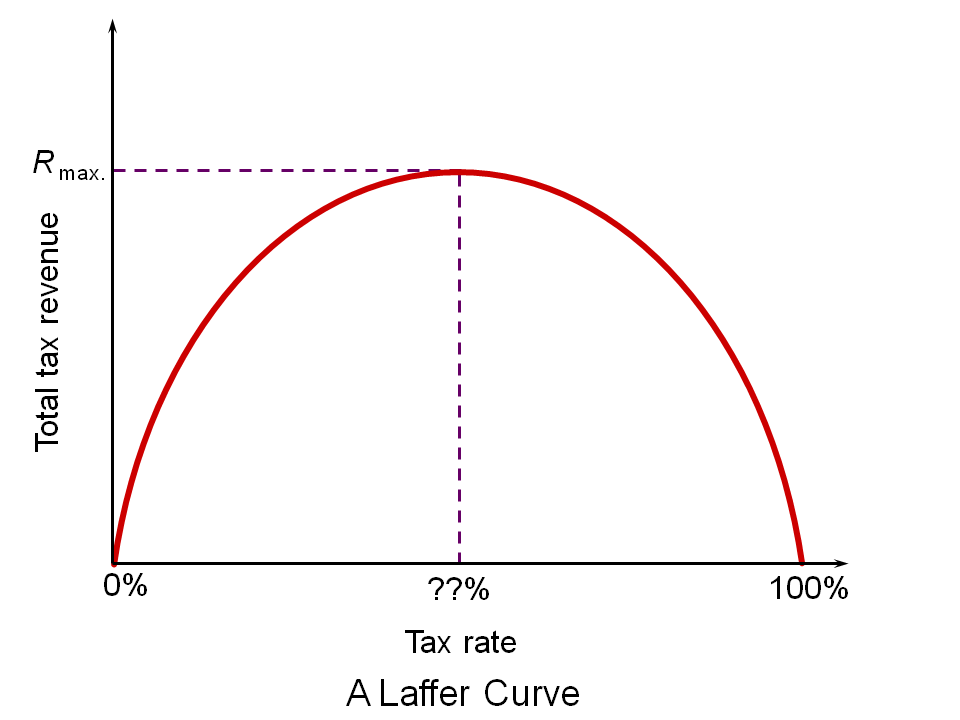 Laffer and his curve became well known during the Reagan administration, when lower tax rates on America’s wealthiest earners actually resulted in more total revenue being collected from that tax bracket.

It’s important to remember that deficits are wholly a government creation, and feeding more money to the endless pit which is big government will never fully appease the beast. When a deficit exists, government spending needs to be addressed and trimmed of excess, first and foremost. But when there still exists a need for more revenue, further draining the tax base is not the answer. Instead, empowering the private sector to earn more drives increased market activity and brings in more revenues in the process.

Economists of all persuasions do not dispute with the relationship between tax rates and revenues demonstrated by the Laffer Curve, they merely disagree over where the curve occurs. But when politicians claim that such a relationship doesn’t exist, they are either demonstrating ignorance or being blatantly dishonest.