Corporate Personhood and the Misconceptions About It

One term which is often incorrectly inserted into political discourse is corporate personhood. Corporate personhood is a legal concept that arises from the extension of certain rights to market entities for the purpose of facilitating commerce and protecting individuals. Its application to campaign finance law has many erroneously rallying against the legal concept with slogans that say “Corporations are not people,” even going as far to call for an amendment to the Constitution to that effect. The problem is their anger is being misdirected at a legal concept they do not understand.

Corporate personhood is the application of certain individual rights to corporate entities, unions, or associations. For example, it enables corporations the right to contract, rights of free speech, and enables them to sue and be sued in a court of law. Not only does it empower corporations, it applies equally to any association of individuals, whether they be a teacher’s union, a college, or a small business. Without corporate personhood these entities would not be able to function; they wouldn’t be able to enter into contracts, employ labor, trade, advertise, and they wouldn’t be able to be sued. Through corporations individuals are able to be shielded from liability. This is important, as without such protections commerce and innovation would suffer. If a shareholder or a board member was personally liable for every invention, every product sold, every workplace injury, and anything that could go wrong, no one would ever do business, the risk of liability would simply be too great. 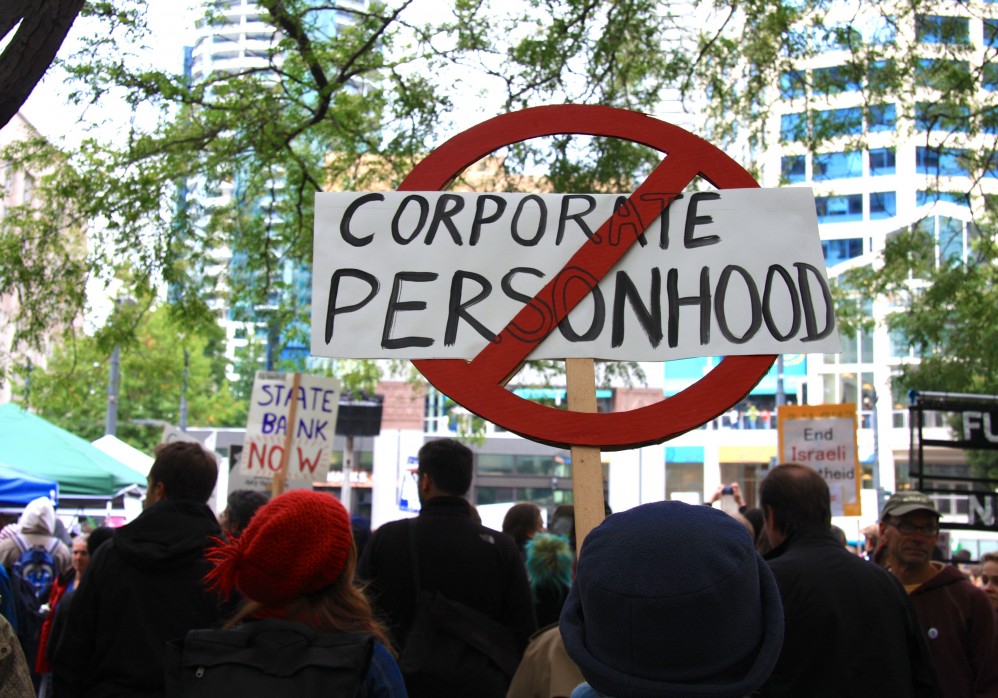 Despite popular opinion, corporate personhood was not created by the Citizens United v Federal Elections Commission decision which the Supreme Court ruled on in 2010. Citizens United merely applied this concept to campaign financing, partially overturning two prior decisions regarding corporate political activity. Because the Court had found in Buckley v. Valeo, in 1976, that spending money was the same as disseminating speech, the Court rightly found in Citizens that preventing corporations and private associations from supporting political campaigns was unconstitutional.

The fallout from Citizens United led to the creation of Super PACs—political action committees funded in part by corporate money. The Super PACs are allowed to advertise and campaign on behalf of causes or candidates which they support, but are not allowed to donate directly to campaigns, as other FEC regulations are involved.

Such is the cry of the left: that corporate money is now buying elections. First, the numbers show that isn’t true. In the build up to the 2012 presidential elections, it was the candidates who weren’t independently wealthy and didn’t have major corporate backers who benefited the most from Super PACs. While primary candidates like Mitt Romney had plenty of money, and would have regardless of Super PACs, candidates like Ron Paul and Herman Cain were able to stay in the race much longer because of their respective PACs, allowing more states to participate in the primary process, and more voters to have a say.

Democrats like to decry Super PACs and corporate personhood, but they too take in big dollars that way come election time. Teacher Unions were some of the biggest players in 2014 midterms, funneling millions of dollars into races with education policy consequences.

The perception seems to be that corporations will only give money to campaigns for some sort of kickback or favor later. While this is illegal, it would be foolish to suggest such activity never happens. If proven, our law already affords protection against such things. What regulating corporate money would do is prevent millions of associations of all shapes and sizes from using their money to support causes they believe in or to have say in policies that will affect the way they do business.

It is not corporate personhood that those who are up in arms are truly upset about. It is its application to campaign finance which they disagree with. But there is no way to change that without violating the 1st Amendment not only for corporations, but for small businesses, unions, and any private association of individuals, and that is a slippery slope.