Escape from the USA!

The failure of Detroit shows what happens when a government increases taxes and regulation beyond the point where individuals feel that they are worth putting up with. As residents abandoned Detroit for parts of the country with less onerous government, the population fell from 1,849,568 to just 713,777. Those who left were the taxpaying residents, those who stayed now have few individuals left to extract tax dollars from. The city simply collapsed under the weight of its government.

Dividing the debts of the Detroit city government, every remaining resident of Detroit owes approximately $26k to the cities creditors. On the other hand, if we divide the debt of the US government, each US citizen owes more than $53k to the nations creditors. If Detroit in a condition bad enough to file bankruptcy, how far behind Detroit is the rest of the nation? Less than a third of the way behind.

The productive residents of Detroit simply ran away to places where they could generate and retain wealth more efficiently. The citizens of the United States are starting down a similar path. Take a look at this chart of Americans renouncing their US citizenship: 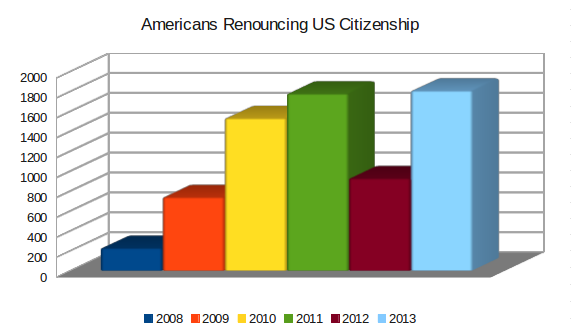 The chart shows an obvious lull in expatriation in Q4 of 2012 as Americans hoped that Mitt Romney would replace Barack Obama as president and begin restoring some sort of financial sense to the operations of the United States government. When that didn’t happen, citizenship renunciations kicked into full speed.

The IRS allows Americans who live overseas, but retain their US citizenship, to deduct a fairly sizeable sum from their gross income. That number is currently $95,100, but it changes yearly. Because of this, most expats owe very little in the way of taxes.

On the other hand, the IRS levies a sometimes draconian “Expatriation Tax” on individuals they feel are trying to escape US taxes. If your average annual net income tax for the last five years is larger than a specific number (currently $155k), or if you net worth exceeds $2M, or if you fail to fill out Form 8854, the IRS can charge you an “exit tax” for capital gains on everything you own. Yes, you can be charged for the “fair market value” of the Beatles White Album your wife gave you in 1968.

If expats receive such a good deduction and can be penalized so heavily for renouncing their citizenship, why are so many of them choosing to run?

The US government has enacted draconian regulations for overseas financial transactions. These regulations are so onerous that most banks outside the United States simply refused to let American citizens open accounts. US citizenship has become a business liability.

The worst of these laws, FATCA (Foreign Account Tax Compliance Act) requires many non-US banks to break the laws of their own nations. That certainly puts the banks in a difficult situation. Most banks avoid it, of course, by simply refusing to let Americans open accounts. If they do allow Americans to open accounts, the IRS can require the bank to withold 30% of deposits to the accounts. Few non-US banks have the systems and procedures in place to implement such idiocy.

FATCA is so poorly constructed that the government had had to repetitively delay its full implementation. The most recent six month delay pushes the date of implemetation to 1 July, 2014 — more than four years after FACTA supposedly “became law”. The Congress passed a bill which is completely unworkable and does not possess the discipline to rescind it.

Another law, known as FBAR (Report of Foreign Bank and Financial Accounts) requires Americans living abroad to report any foreign accounts over $10k, with penalties of up to 50% of the account balances.

Yet another reporting burden placed on expats is the requirement to file a Form 8938: Statement of Specified Foreign Financial Assets for any foreign assets over $50k, with a maximum penalty of $60k.

Why the US is Different

The United States and Eritrea are the only nations in the world which attempt to tax their non-resident citizens on non-resident income.

Switching from our current global tax system to a more standard territorial tax system would increase the ability of Americans to do business abroad. It would also help America to quit alienating the governments and banking institutions in most of the world. In addition, it would go a long to towards allowing US citizens to regain lost financial and personal privacy. Finally, it would help to stem the rising tide of Americas best and brightest choosing to leave American citizenship behind.