Why your cash would likely test positive for drugs

It is commonly known that about four out of five federal reserve notes in circulation at any one time will test positive for cocaine residue. Snopes calls them “dollar bills,” but it’s an accepted fact that your cash probably has cocaine on it. Trace amounts get into counting machines used by banks, casinos, and check cashing joints and it’s all over the place. There’s even a story where a British bus driver was able to successfully argue a failed drug test because he had handled a large amounts of currency immediately prior to being administered the test.

As any decent drug dealer biopic will attest, there comes a time in every successful drug dealer’s career where the cash becomes a potential road block or, worse yet, a liability. George Jung, who was played by Johnny Depp in Blow, knew what few do: rooms full of illicit cash are a problem. Given that the global illegal drug trade brings in more than $400 billion a year, with cocaine making up over $80 billion of that, it’s really no surprise that any involved criminal enterprise will find ways to avoid headaches with currency.

We are walking around with cash that likely could not pass a probation officer’s surprise drug test, and drug dealers have stacks of cash. The connection is our banks. As the figures grow, it’s harder than ever for major banking interests to make sure their hands are “clean.” And that’s IF they worry about it on more than a surface level to begin with.

In 2006, Bank of America acknowledged that it had, through “lax operations,” allowed South American drug cartels to launder more than $3 billion through one Manhattan branch. No indictments were sought because the Manhattan District Attorney did not “want to put banks out of business.” During this same time frame, BofA accepted questionable deposits of $10 million from the leader of Equatorial Guinea. As recently as 2013, the FBI was filing affidavits alleging millions of dollars in drug money was flowing through the bank into supposedly legitimate endeavors. Of course, there is no allegation of wrongdoing against the bank because we surely wouldn’t want them to go out of business. 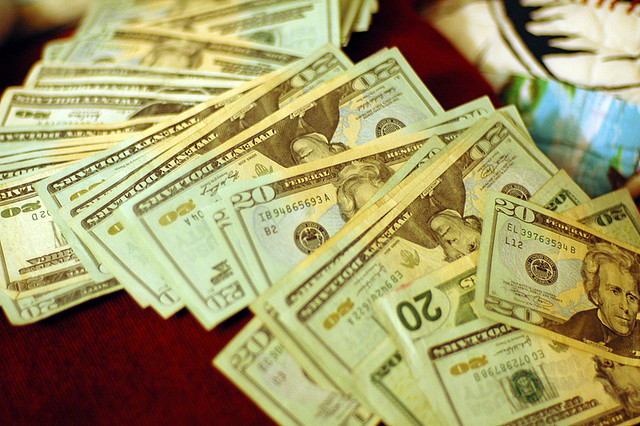 If Bank of America’s operations were “lax,” things at Wachovia were stunningly horrid. In 2010, Wachovia, which had been acquired by Wells Fargo during the 2008 crash, agreed to a “deferred prosecution” settlement with the Federal Court in Miami. It forfeited $110 million in proceeds tied to drug activity and paid a $50 million fine. It turned out Wachovia was warned as early as 2004 that certain transactions to and from Mexico were highly suspicious and admitted as much in the settlement statement with the Federal Government. All told the bank admitted more than $370 billion dollars were moved without “proper anti-laundering procedures” being applied. For this, they were acquired by a bank that had just received $25 billion in taxpayer bailout funds, given a fine that amounted to less than 2% of its total value, and admonished to behave for a year or there would be serious trouble. No individual was ever indicted for giving narco terrorists what federal prosecutors described as “carte Blanche” to circumvent safeguards intended to stop money laundering.

The British bank, HSBC found itself on the business end of another “deferred prosecution settlement” in 2012. It seems things at HSBC had gotten so bad that the bank had become known as “the preferred financial institution” for drug smugglers and money launderers. To the point where cartels were building special deposit boxes to fit as much cash as possible into teller windows at Mexican branches. Under the terms of the agreement with prosecutors, HSBC forfeited more than $1.2 billion in questionable proceeds, paid $665 million in civil penalties to resolve actions by the U.S. Office of the Comptroller, the Federal Reserve and the Treasury Department, acknowledged “major lapses in compliance,” and agreed to “take steps to fix problems.” In addition, the bank also admitted to enabling customers to avoid U.S. sanctions against countries like Iran, Libya, Sudan, and Cuba. All this and not a single individual ever tried or jailed for an estimated $881 billion in laundered drug proceeds over half a decade. No worries though, HSBC Chief Executive Stuart Gulliver assures everyone that, “The HSBC of today is a fundamentally different organization from the one that made those mistakes.”

While the Feds were hitting HSBC with “record fines,” they were looking into activities at a Citigroup subsidiary, a Mexican bank called Banamex. In 2013, Citigroup was scolded by the Federal Reserve. The bank had already been warned by the U.S. Comptroller and the FDIC regarding perceived gaps in its anti-laundering procedures. Citigroup was ordered to submit plans and undergo investigations to prove its compliance with the Bank Secrecy Act. A year later, a federal grand jury in Massachusetts, began an investigation into the bank’s apparent failure to follow the plans it had submitted previously. As of February 2015, The Financial Crimes Enforcement Network, a unit of the U.S. Treasury, had joined the investigative dogpile with an investigation of upwards of $400 million in questionable deposits in Mexico’s second biggest bank. It’s easy to see a deferred prosecution agreement, and quite possibly another “record setting” fine in the future. A solid bet would be that no individual from Banamex or Citigroup will ever be indicted for any of it.

Another Deferred Prosecution Agreement delivered by state and federal prosecutors involves JPMorgan Chase. Having already paid more than $88 million in an agreement to settle allegations that the bank violated regulations against lending money to entities involved in illicit nuclear trades, the Department of Justice also hit the bank with a cease and desist order regarding its failures to comply with the Bank Secrecy Act. Tucked into the more than $2 billion agreement the bank made with prosecutors over its misdeeds involving Bernie Madoff, was a $461 million fine levied by the Treasury Department’s Financial Crimes Enforcement Network fined Chase for Bank Secrecy Act/Anti-money Laundering related violations. Being that it’s always good to be a bankster, the Feds went ahead and called that $461 million “satisfied” when the bank paid a separate $1.7 billion fine to the state of New York.

Amazingly, all of these “harsh” penalties are tax deductible.

So, it’s really no wonder that a majority of the cash in circulation could cause a well trained drug interdiction dog to take a greater than average interest in the contents of your wallet. When the largest banks in the world know that even the biggest of fines is still a tiny fraction of the profits made from letting cartels shove large amounts of unwashed cash through its teller windows, why would they really take an interest in stopping it? When fines worth billions of dollars still result in not a single individual facing jail time, why wouldn’t they skirt the edges of the law, at the very least?

After all, we surely wouldn’t want to put banks out of business.