Lobbying and the Misconceptions about It

Lobbyist are often decried as the reason for most of what is wrong with our country, government, and society as a whole. They are those lowdown scoundrels of big moneyed influence and corporate cronyism who buy congressmen as easily as one orders Chinese takeout, and who have sinister influence on all matters of policy.

The truth is far more nuanced and far less exciting. Yes, some lobbyist have influence with some lawmakers. It is also unequivocally true that many relationships between lawmakers and the industries which they regulate are more than a conflict of interest. But let us not throw out our right to petition government, our right to free speech, and or right to spend our money how we choose, without first examining the system that incentivizes such behavior.

The modern liberal legacy is one of increased government control over the economic sphere. This legacy has aimed to regulate these economic sectors towards a “fairer” ends. But when you bring government into an industry, you are inadvertently politicizing that industry. It is often said by those on the left, for example, that government should not legislate concerning a woman’s body. But it is the liberal insistence on involving government in the funding of birth control and abortion which leads to the political debates and actions surrounding it.

From housing to health care, from energy production to prescription drugs, the more government is involved, the more politicized it will become. And once government positions itself to set the rules and the playing board for any industry, every player in that particular industry now has a direct incentive to lobby the government on behalf of their interests. You could choose to not lobby the government, but your competition will, and without your input there is nothing to stop rules from being written that would hurt your business and benefit your competition.

Many lobbyists are hardworking, honest people who simply want to ensure that any laws being passed are not harmful to the industry they represent. In many cases, lobbyists provide helpful insight and advice for politicians relating to industries or fields they are inexperienced in. Congressmen are asked to legislate on so many issues, they cannot possibly be expected to know all the information pertinent to any given subject. A lobbyist can help them navigate the waters of unfamiliar industries.

Lobbyist don’t all hail from corporate America, either. Unions have lobbyists, as do nonprofits. Sometimes a lobby will form to promote specific issues. Pro second amendment lobbies exist, as do lobbies that encourage more gun control. The existence of one necessitates the existence of the other. There are also lobbies that argue for tax reform, greater government transparency, and greater fiscal responsibility. Many lobbies are dedicated to worthwhile ends. 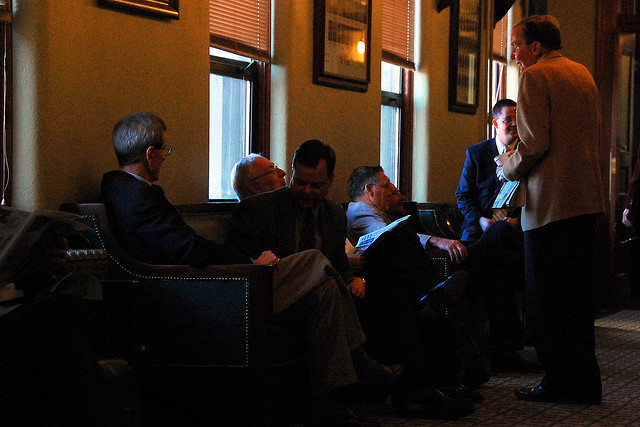 While illicit relationship undoubtedly exist, the problem is the involvement of government to begin with. We must realize the inevitability that once government has power over any industry, people will seek to influence that power. We must then be extremely cautious when letting government have power over business or our personal economic activities. Of course, when the government is writing legislation like the Affordable Care Act, insurance companies are going to spend untold sums to influence it as much as possible to their benefit. When we let the government into the henhouse, the wolf always follows.