The Unintended Consequences of Higher Wages for Fast Food Workers

The Service Employees International Union (SEIU) is engaged in a major campaign to increase membership by unionizing the employees of “fast food” restaurants. As part of this effort, it is providing staff, training, and funding for activists who are promoting an increase of the Federal Minimum Wage by either 50% or 100%. This increase would have the obvious effect of a short-term improvement in the financial conditions of fast-food workers. The long-term consequences, however, are less obvious.

No one knows exactly how much increased labor costs will effect the costs of fast-food to the consumer. A widely-reported study which claimed that doubling McDonalds salaries would cause the cost of a Big Mac to increase by only $.68 turned out to be based on faulty data — but that did not prevent the $.68 number from spreading.

The Employment Policies Institute estimates that the average fast-food restaurant spends 30-35% of its income on labor. Based upon that, we can very roughly assume that doubling the cost of labor will increase the cost of fast-food to the consumer by 15-17.5%.

The law of supply and demand teaches us that an increase in the cost of a good reduces demand for that good. While a cost increase of 15% doesn’t seem real or important to the limousine liberals who don’t eat fast food anyway, any cost increase will have an immediate effect on the struggling individuals and families who are responsible for the majority of fast-food purchases. The net effect will be reduced sales for fast-food restaurants. 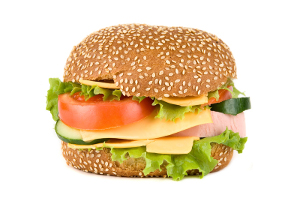 Store owners will respond to reduced sales by maintaining smaller shift crews. This will require laying off workers, reducing worker hours, and slowing the hiring of additional workers.

This effect is more than linear, however. With a larger cost per employee, the businesses will require a higher contribution per employee before adding an additional worker to a shift. This means that every worker who is retained will have to work harder. It also means that the ratio of employees to customers will decrease, meaning longer wait times for service.

As costs rise, stores eventually hit a point where maintaining a work force during marginal hours causes the business to lose money. The response is to reduce store hours. The Burger King that was open 6am to 2am will cut its least profitable hours and open only from 7am to 8pm. This will result in fewer hours for the remaining workers.

Some fast-food locations are exceptionally profitable, while other locations are only barely above the break-even point. An increase in the cost of labor moves the break-even point and will result in the closure of marginal restaurant locations. The Panda Express in your local mall will likely remain open, but the Panda Express near your home may have to close its doors. This will also exert a negative effect on real estate values in marginal neighborhoods.

Increased Use of Fossil Fuels

The best long-term strategy for businesses facing increased labor costs is to replace labor with automation. Fast-food restaurants will replace human order-takers with automated touch-screen ordering systems. This may increase employment in China, where the machines are manufactured.

Fast food workers may lose their jobs as a result of wage increases, even if the total number of fast-food jobs does not decrease. This is because fast food jobs become more desirable at a higher wage. If fast food jobs pay better, they will attract employees who would otherwise enter other fields. A person who might have become an apprentice plumber will instead choose to work in the fast food industry. Fast-food workers will face increased competition from workers in all fields with a comparable wage range. The fast food worker who strikes for higher wages may find that he has only succeeded in obtaining a higher wage for his replacement.