Wages and the Cost of Living: What Isn’t Being Considered

The case for higher minimum wages across the country is based on the premise that Americans cannot keep up with the cost of living. Recently I came across a post that charged Wal-Mart was irresponsible because a high number of their employees were receiving state benefits. The post claimed that Wal-Mart’s wages are so low that US taxpayers end up supporting those workers through welfare. They would have a good argument, if Wal-Mart had any effect on the cost of living.

People demand higher wages to meet a constantly increasing cost of living. Yet, no one demands a lower cost of living. It’s as if the value of the dollar, the rate of taxation, and public debt, just manifest out of thin air, and all we can do is demand employers foot the bill. But Wal-Mart doesn’t control the cost of living. The US government does, and it is very willing to pass the buck onto employers who are already up to their eyebrows in excessive regulations and costs which Uncle Sam has saddled them with.

Government spends money it doesn’t have, devalues our currency to help pay for it and borrows the rest. A weaker dollar means things are more expensive. Additionally, mandates such as the Affordable Care Act add even more expense to business operations. The people cry for big government, when the get it they don’t like the cost, so they cry for big government to soak their employers and force higher wages. 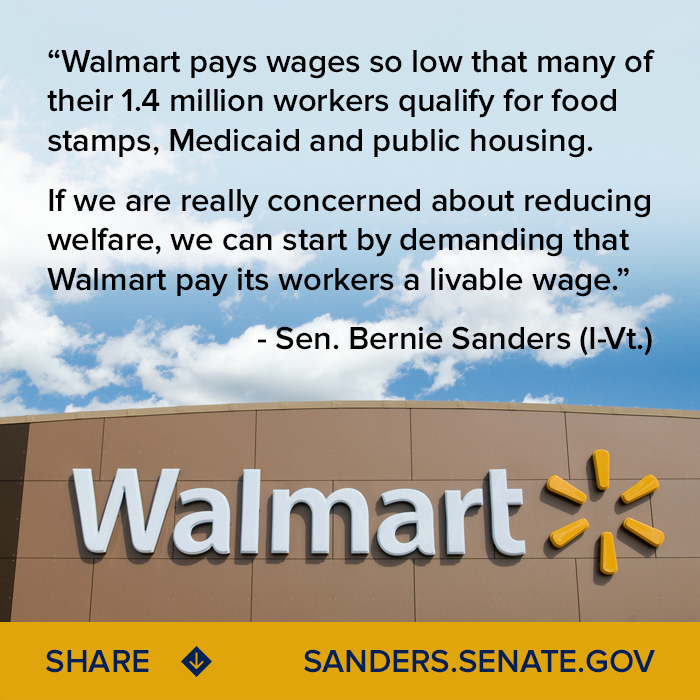 Ironically, the post comes from Senator Bernie Sanders, who, unlike Wal-Mart, does vote for the very policies which cause the cost of living to raise

Let’s pretend Wal-Mart abdicated all self-interest, ignored common economic sense and raised its lowest wages to $15 an hour. How long do you really believe that wage would be sufficient? 5 years? Maybe 10? Before too long our government will have caused enough inflation that $15 an hour will feel like $8 an hour.

Proponents of higher wages are trying to fix the problem with the proverbial hair of the dog. It is more of the same actions which led us to this current scenario. We don’t need higher wages, we need better fiscal policies, a stronger national currency, considerably less government spending, and less taxation and regulation.

With the right kind of fiscal policies, a strong economy will emerge and things will become more affordable. Mandating higher wages to compete with a runaway cost of living is like trying to dig ourselves out of a whole, it’s only going to get us deeper in.