American public schools continue to deteriorate while the education system mass produces mediocre students, unprepared for the challenges of real life. In the information age we live in today, we need smart students who can become globally competitive citizens, like never before. The public school system is detrimental to the success of our kids in many ways. What we urgently need is a school choice; a free market in the field of education.

Not long ago, we didn’t have much of a choice when it came to schooling our kids. Luckily, the times are changing. Although we have yet to realize a transformation of our lagging education system. We now have private schools, charter schools, and even homeschools which were not long ago outlawed across the US.

Private schools are educational institutions run independently of the government. A private school’s focus can be religious-based, academically-intensive, and/or specialized for specific groups of students. Private schools typically charge tuition, but not always. There are more than six million students attending nearly 34,000 private schools across the United States. 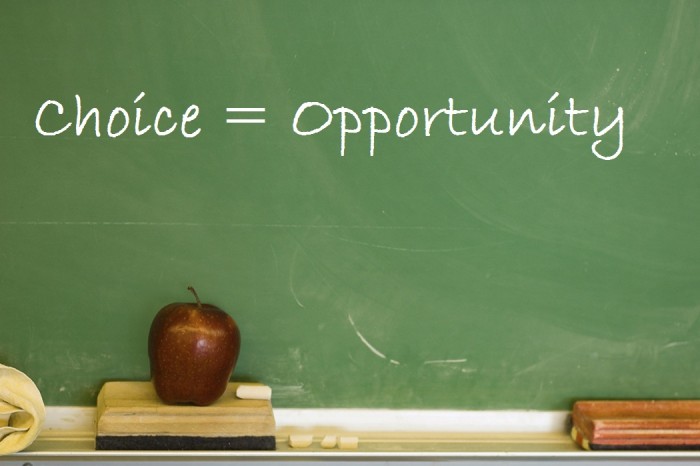 Charter schools are independent public schools exempt from many state and local rules and regulations in exchange for increased financial and academic accountability. Schools are chartered by the state and are typically required to adhere to state-based standards, including the administering of the state assessments. Today, 42 states and Washington, D.C., have charter school laws. There are 2.3 million students attending 6,000 charter schools in the United States. However, per pupil local funding and state regulations limit access to these schools.

Homeschooling is an alternative form of education for children outside of public or private institutions, typically within their own homes. Homeschooling is regulated differently from state to state. In some states, parents are able to create their own curricula, whereas other states require standardized tests, curriculum approval, and regular professional evaluation of students.

There is also online learning. Online learning allows students to work with their curriculum and teachers over the internet—in combination with, or in place of, traditional classroom learning. There are an estimated 2 million enrollments in distance-education courses in school districts, almost all of which were online courses.

As Milton Friedman said of school choice, “Improved education is offering a hope of narrowing the gap between the less and more skilled workers, of fending off the prior prospect of a society divided between the “haves” and “have nots,” of a class society in which an educated elite provided welfare for a permanent class of unemployables.”

The only solution to the public school crisis is to break the monopoly, introduce competition, and give customers alternatives. The educational bureaucracy will fight tooth and nail against the idea of market competition in schooling, but this is the only way to change the course of public education. As Rose D. Friedman once famously said, “If you end up with a population that doesn’t know how to read, doesn’t know how to write, knows nothing about history, knows nothing about geography, who’s going to conduct the affairs of the country?”