Greco-Communism: The Cause of the Greek Economic Drama

Until recently, there was more socialism in Greece than was ever seen in the Soviet Union. Higher education, stipends and food for students was provided for free by the State. Public sector workers were entitled to  fourteen month salaries for a year’s work, in addition to social benefits and various bonuses. Job security was unrivaled, it was nearly impossible to fire a government worker.

With such benefits and security, the public sector grew to occupy 40% of the economy. The power of the unions was monstrous. Due to the influence of radical anarchists and communists, Greece has experienced more strikes than any other European nation.

Nearly all government owned companies in Greece are a burden to the public since they don’t produce any income. Greek Railways are more than €10 billion in debt while the train operators receive a hefty €60- 100k yearly salary. The same goes for the formerly publicly owned Olympic Airlines. Due to its multibillion dollar debt and mismanagement the airline had no choice but to privatize, the laid off workers received more than €1 billion in compensations.

This communism made the Greeks in debt long after la dolce vita. According to the Ethos Capital Investors, in the mid-2000s Greek citizens were the primary buyers of Porsche Cayenne cars and luxurious yachts in Europe.

Greece spent more than €9 billion on the Olympic Games in Athens in 2004, though the infrastructure built for the events now lies abandoned and in disrepair. 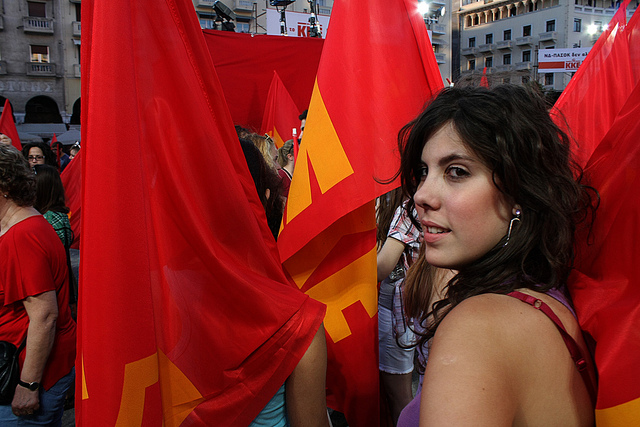 Photo by Teacher Dude’s BBQ
In Northern Europe the welfare state is at least supported by high taxes, but the corrupt and inept Greek government couldn’t even collect taxes to support the lavish lifestyles of its public sector.  This created a horrid business climate. The Greek businesses were absurdly over regulated. In the Doing Business rating Greece ranks 61st place, between Tunisia and Russia. But this is  progress, considering that before 2010 and the austerity reforms the country was ranked 108th place.


But instead of blaming themselves, the Greeks decided to take an easy path and blame Europe and international financial organizations. They let the radical leftists take over the government and apply their failed populist principles. Instead of trying to live according to their means and work towards the prospect of a steady recovery, the Greeks will see a Marxist government further destroy their country.

This Greek drama was brought about by the populace itself. All the EU can do at this point, is to take a back seat and watch it become a farce when the Greek government runs out of loans and other people’s money.