Trade and Commerce: the Pillars of Peace and Prosperity 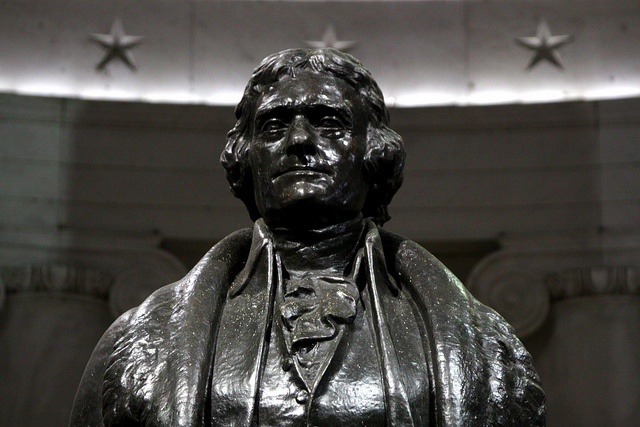 “A wise and frugal government which shall restrain men from injuring one another, which shall leave them otherwise free to regulate their own pursuits of industry and improvement, and shall not take from the mouth of labor the bread it has earned. This is the sum of good government.”

“Free trade consists simply in letting people buy and sell as they want to buy and sell. It is protection that requires force, for it consists in preventing people from doing what they want to do. Protective tariffs are as much applications of force as are blockading squadrons, and their object is the same—to prevent trade. The difference between the two is that blockading squadrons are a means whereby nations seek to prevent their enemies from trading; protective tariffs are a means whereby nations attempt to prevent their own people from trading. What protection teaches us, is to do to ourselves in time of peace what enemies seek to do to us in time of war.”

World trade is based on the same principles as any voluntary exchange. Trading parties are able to produce and consume more than is otherwise possible. Under  a free trade system, the people of a given country are able to use more of their own resources to produce and sell goods and services other countries might not. Profits are then used to buy goods which they either can’t produce or can only produce at a greater cost.

The presence of resources and their abundance varies by country, and this influences production costs. Goods which may cost a lot to make in one country will cost only a fraction of that in another country. Under a system of trade everybody wins. Countries with warm, wet climates like Brazil and Colombia profit from growing and selling coffee. Countries like Canada and Australia, with their large landmass and small population density, profit from growing wheat, forage crops and beef. Japan, with its limited land resources but a highly trained workforce specializes in cars and electronics. This specialized production in the world trade results in economic growth and arise of prosperity between nations that engage in trade.

Free trade is a win-win situation for producers and consumers since the it reduces the costs through large-scale production. This is especially true when it comes to smaller countries. Textile companies in Taiwan, South Korea, and Hong Kong would have had much higher production costs if they weren’t able to sell their products on the world market. The domestic market in these countries is too small to have a viable large scale manufacturing. But thanks to the international trade the textile manufacturers of these countries are able to make and sell large volumes of their products, successfully competing on the world market.

International trade is also beneficial for the consumers by letting them buy cheaper goods produced by large foreign manufacturers. The aviation industry is a primary example. This industry has an enormous design and production costs, and the market volumes of almost every country is too small for an efficient large airplane manufacturing. But thanks to the world trade the market is divided between Boeing, McDonnell-Douglas, and Airbus.

Free trade allows competition on the domestic market and lets the consumers buy a variety of products at a reasonable price. Foreign competition keeps the domestic manufacturers on alert, forcing them to improve the quality of their products and keep the production costs low. A wide variety of foreign goods gives the consumers greater choice. A case in point is the American auto industry. When the “Big Three”  encountered  stiff competition from the Japanese car makers they were forced to improve the quality of their cars. As a result, the North American consumers got better and more reliable cars and trucks, both foreign and domestic. This wouldn’t have happened if not for the foreign competition.

When countries introduce tariffs, quotas, exchange rate controls, bureaucratic regulations of export and import, and other kinds of trade barriers, they raise costs and lower  profitability. As Henry George said, “Protective tariffs are as much applications of force as are blockading squadrons, and their object is the same—to prevent trade.”

Free trade also keeps the world safer.  There have been three periods in the world history when a unified set of rules of a strong but small government ensured global stability and peace through free trade and the abolition of barriers. First was the Pax Romana. The term “Pax Romana,” which literally means “Roman peace,” refers to the time period from 27 B.C.E. to 180 C.E. in the Roman Empire.This 200-year period saw unprecedented peace and economic prosperity throughout the Empire, which spanned from Britain in the north, to North Africa in the south, and Babylon in the east. During the Pax Romana, the Roman Empire reached its peak in terms of land area, and its population swelled to an estimated 70 million people.

The Romans learned that the law, order, stability, and unhindered commerce were a much better glue for their Empire than endless wars and military conquests. The Roman government had ensured universal stability by pacifying the warring tribes and kingdoms and destroying the Mediterranean pirates, but it kept the peace through building roads and other vital infrastructure.

I am for a government rigorously frugal and simple. Were we directed from Washington when to sow, when to reap, we should soon want bread.