10 Terrorists Who Got What They Deserved 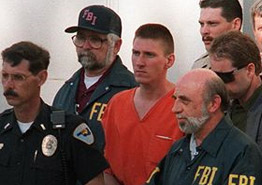 Unlike most of the modern day terrorists who more often than not are Islamic extremists, Timothy McVeigh was an American domestic terrorist, who detonated a massive truck bomb in front of the Federal Building in Oklahoma in April 19, 1995. This was cited as the deadliest act of terrorism in America prior to 9/11 attacks. 168 people were killed and more than 600 were injured in the Oklahoma City Bombing. McVeigh, a Gulf War veteran, claimed the bombings to be revenge for the Waco siege in Texas, that saw 76 men, women, and children killed during a standoff with federal agents, exactly 2 years prior to the bombings. Amid the evidences that traced back to him, he was arrested and convicted to death. He was executed by poison injection on June 21, 2001.

All depressions are caused by government interference and the cure is always offered to take more of the poison that caused the disaster. Depressions are not the result of a free economy.