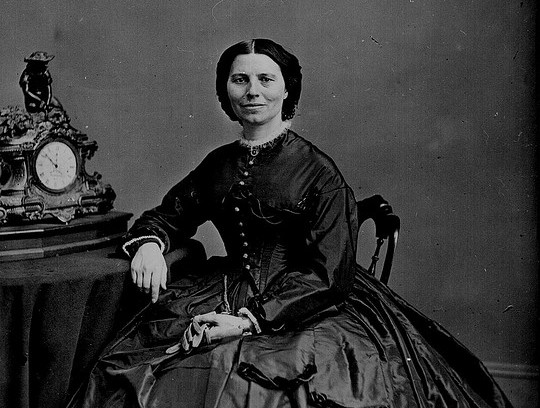 Clara Barton was a pioneering nurse who first brought medical care to the front lines during the Civil War and later founded the American Red Cross. When the Civil War broke out in 1861, she was behind the campaign to gather medical supplies for the troops. She received official permission to transport supplies directly to the battlefields where hospitals were then set up. Without any formal training, she assisted doctors and surgeons and tended to the wounded and ill at all of the major battles in Maryland, Virginia, and South Carolina. After the war, she led the effort to identify missing soldiers and find and mark thousands of graves. Considered a heroine, she testified in Congress about her war experiences and lectured to large audiences in over three hundred venues from 1866 to 1868.

While in Europe in 1869, she learned about the International Committee of the Red Cross and aided in setting up military hospitals in the Franco-Prussian War. Returning to the US, she undertook a five-year campaign to establish the American Red Cross, adding disaster relief to the organization’s charter. As president, Barton oversaw relief efforts for 21 disasters both domestic and foreign and laid the foundation for the organization that we know today.

I am for a government rigorously frugal and simple. Were we directed from Washington when to sow, when to reap, we should soon want bread.