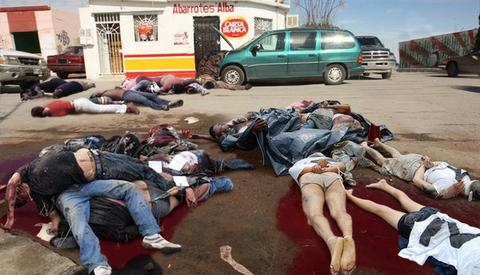 Who wants to keep marijuana illegal more so than almost anyone else? Drug dealers and drug cartels. In fact just legalizing marijuana in two states is having a major financial effect on Mexican cartels. In case you aren’t aware, these cartels are some of the most ruthless, vicious criminals in the world. Not only are they ruthless, they’re exceedingly wealthy. The head of the Sinaloa Cartel even made the list of Forbes Magazine’s Most Powerful People.

You might think that by keeping marijuana illegal you are keeping people safe. The reality is you are lining the pockets of men who murder with relative impunity and export drugs and crime to the US. By continuing to prohibit recreational marijuana, we are only ensuring the cartels will continue to thrive. Not only the cartels, but every nickel and dime drug dealer in America is counting on you to support continued criminalization so they can continue to make money in the black market. With black market activity comes crime. During prohibition, it was a regular occurrence for someone to be murdered over alcohol. Now Americans drink in bars and shop for booze every day without incident. And let’s be honest: booze will cause you to do a lot more harmful and stupid things than pot.